Covering over four acres, the Enid A. Haupt Garden is situated between the Smithsonian Castle and Independence Avenue and has provided a welcomed respite for Smithsonian visitors since it opened in 1987 as part of the redesigned Castle quadrangle. Composed of the Parterre, the Moongate Garden, and the Fountain Garden, the Haupt Garden’s design brings together the cultures and architecture of the surrounding museums and buildings.

While wandering its brick paths, admiring the parterre and hanging baskets, or enjoying the sound of splashing fountains, few visitors to the Haupt Garden realize that they are standing on the roofs of the National Museum of African Art, the Arthur M. Sackler Gallery, and the S. Dillon Ripley Center (International Gallery). 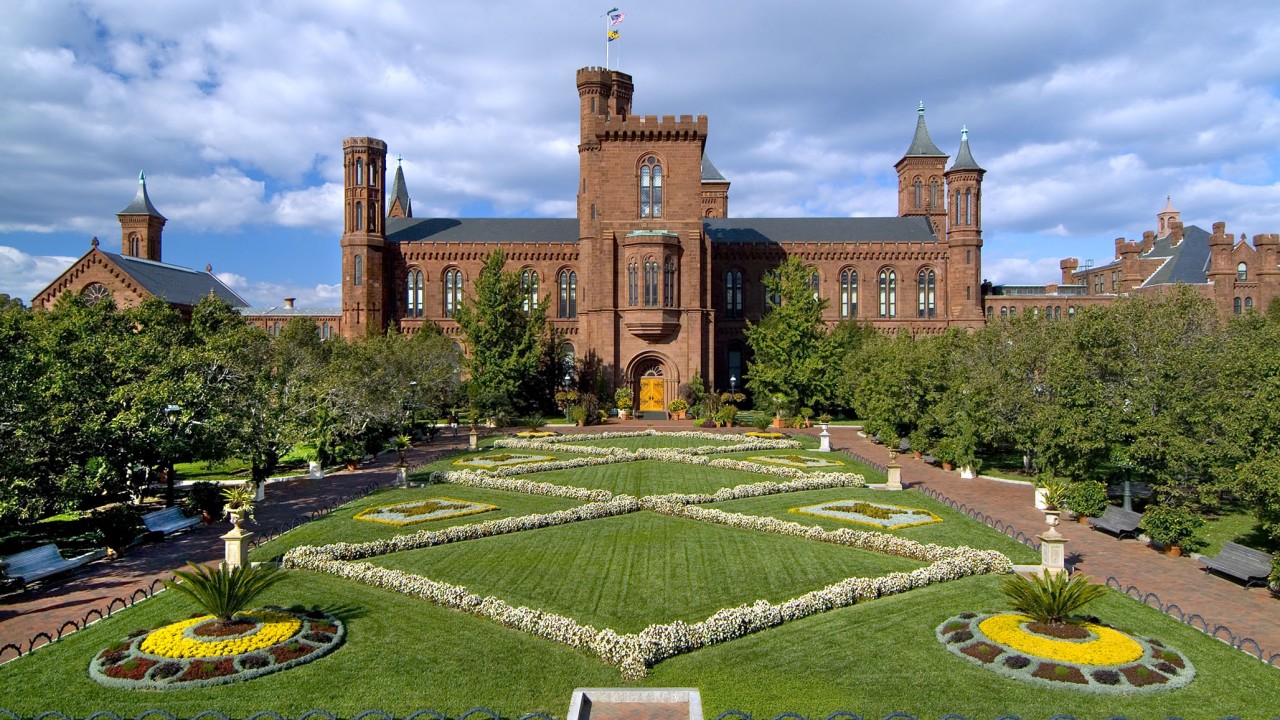 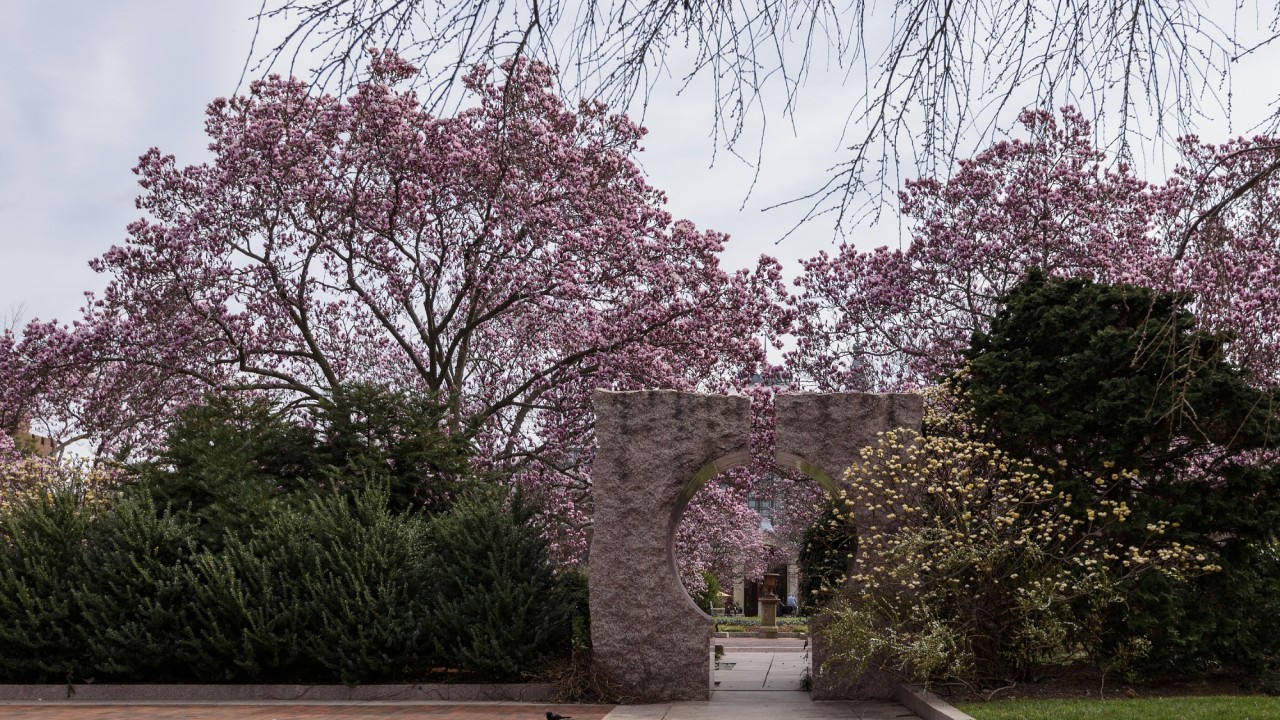 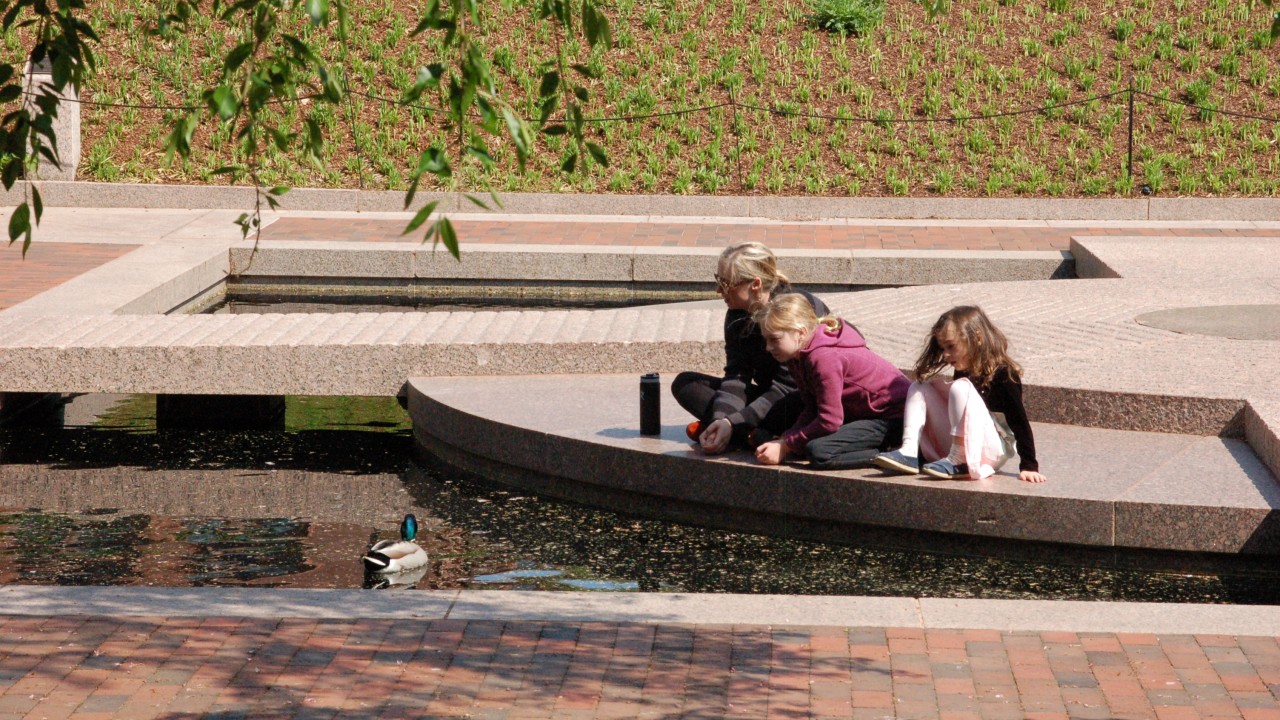 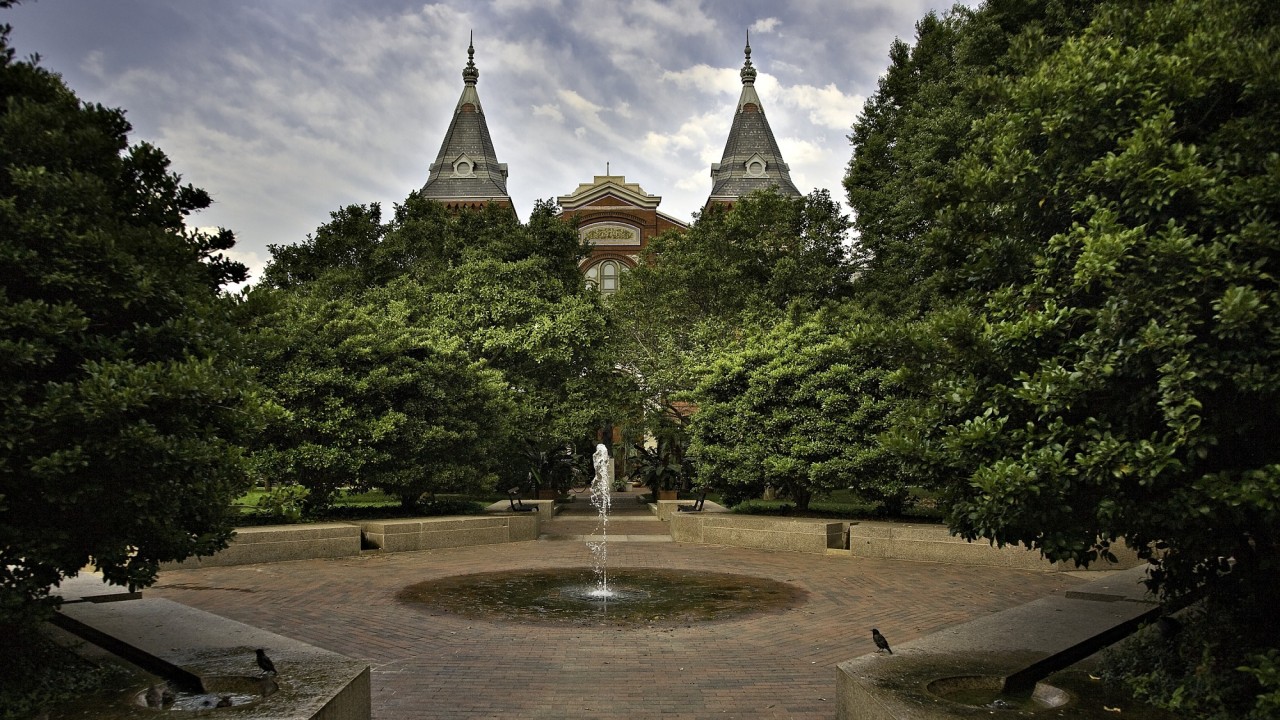 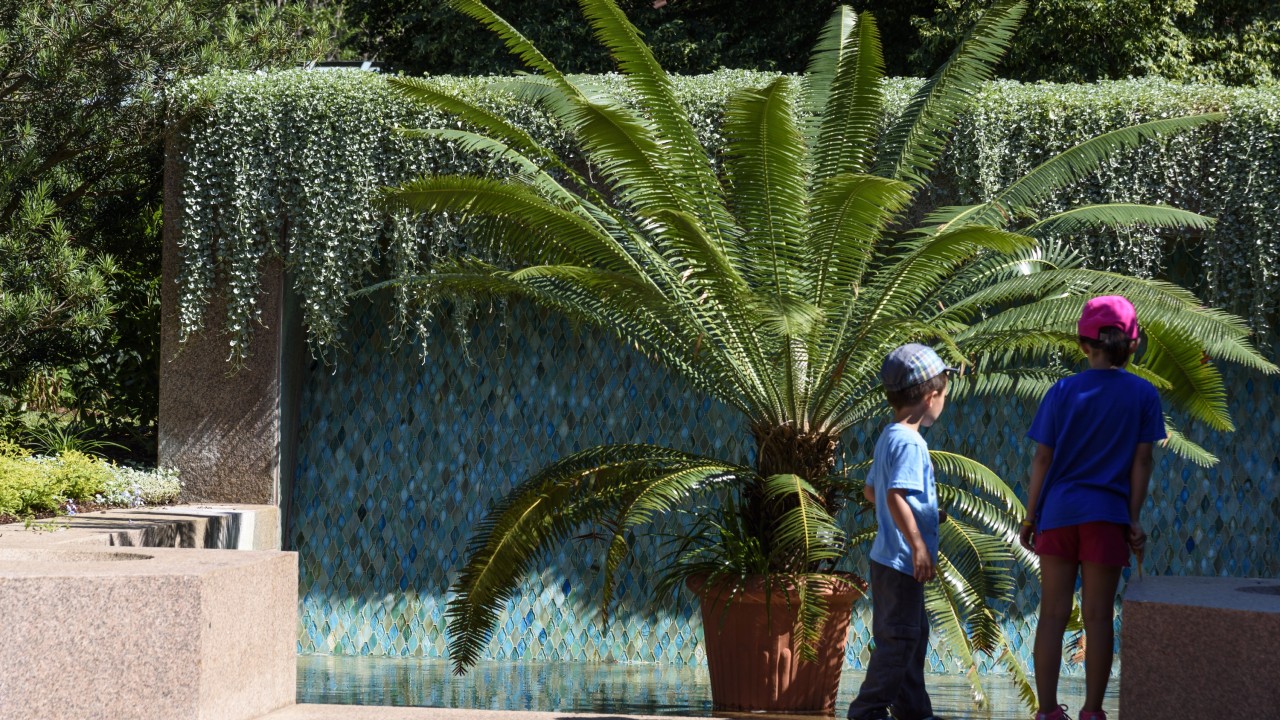 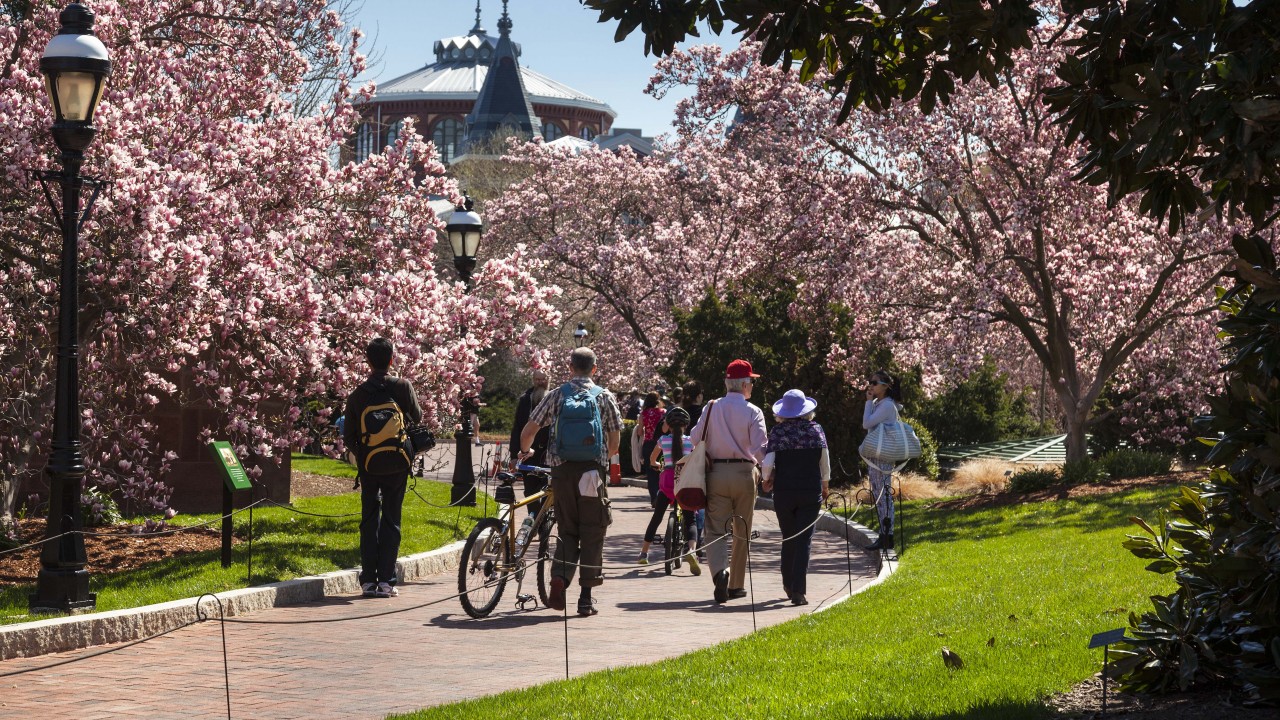 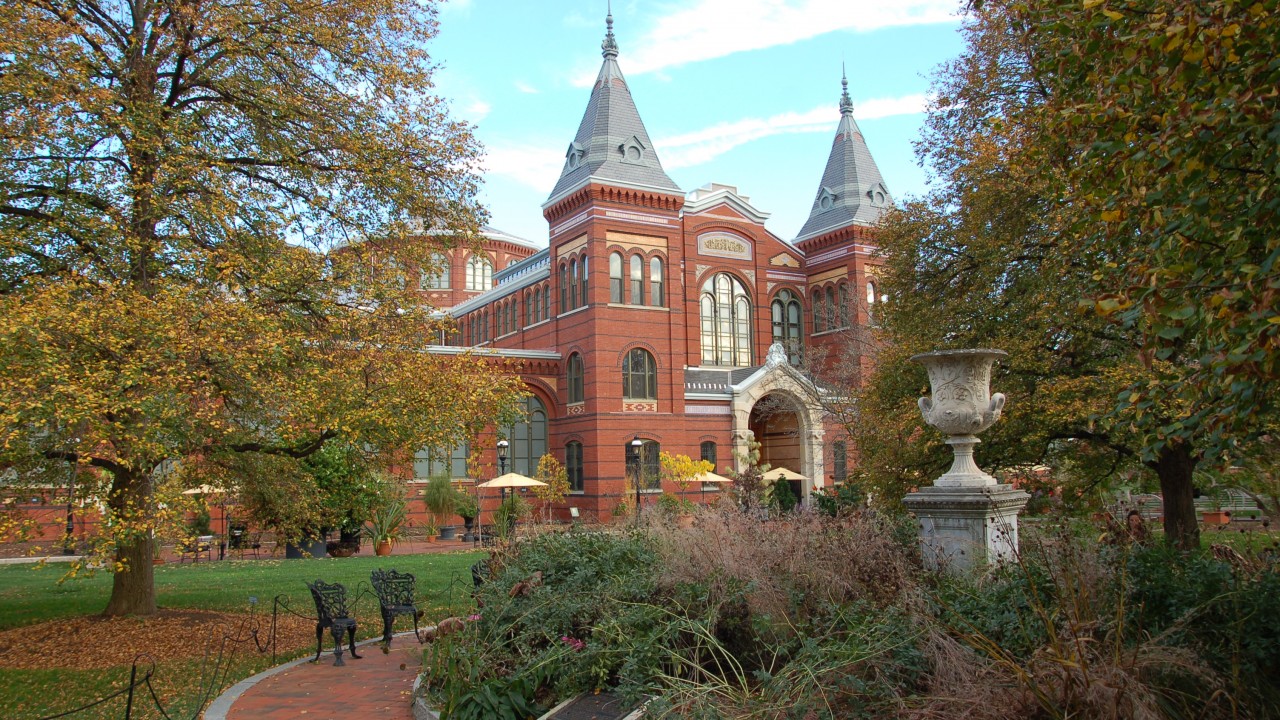 The Parterre, the centerpiece of the Haupt Garden, is a carefully manicured garden with a changing palette of colors, shapes, and textures. Because formal parterres are typically associated with the elaborate designs of the Victorian era, this garden type was a natural choice to complement the ornate architecture of the adjacent Smithsonian Castle. Throughout the year, layers of colorful plantings are meticulously laid out in symmetrical patterns that are redesigned every few seasons. Designs incorporate such motifs as diamonds, fleurs-de-lis, scallops, and swags.

While parterre is a French term meaning “on the ground,” parterres as an ornamental garden style originated in 16th century Renaissance Italy. The style, which defines the garden space through hedges, flowers, grass, and gravel, was adapted in France in the 1580s and became exceedingly popular. Parterres fell out of favor during a shift to more naturalistic designs in 18th century Europe and North America. The presence of a parterre at the Smithsonian Institution actually predates the creation of the Enid A. Haupt Garden. In celebration of America’s bicentennial, a parterre, inspired by a design from the 1876 Centennial Exposition Horticultural Hall in Philadelphia, was created behind the Smithsonian Castle in the south yard. When the Enid A. Haupt Garden was created this parterre was saved and incorporated into the new formal garden.

The Moongate Garden, designed by architect Jean Paul Carlhian, was inspired by the gardens and architecture of the Temple of Heaven in Beijing, China. The Temple of Heaven was designed using a geometrical, axial layout, centered on the cardinal points of the compass. The garden is meant to take its visitors to a relaxing place surrounded by water where they may absorb the cool air emanating from the water.

Granite and water are used abundantly in the Moongate Garden; water, in fact, is the dominant feature. Rocks and water in Chinese culture symbolize the basic constituents of nature. Rock is thought to symbolize the body of the earth while water symbolizes the spirit thereof. The water’s reflection gives the garden the appearance of being larger than it actually is. It gives off shimmering light effects in the sunlight and reflects the glow of the moon at night.

The overall circular pool design of the Moongate Garden is meant to remind us of the windows in the National Museum of African Art, a technique that Carlhian also applied to the Fountain Garden. The path leading into the Moongate Garden enters at the southwest corner and exits at the northeast corner. Carlhian called this the “pinwheel treatment” and utilized it to align important features of the Arts and Industries Building with the Freer Gallery

The Moongate Garden features two 9-foot-tall pink granite moon gates on either side of a pool that is paved with half-round pieces of granite. Two more gates are laid flat to provide seating in opposite corners. The gates are strategically placed to frame important features of the surrounding landscape.

Located beside the entrance to the National Museum of African Art, the Fountain Garden was also designed by Jean Paul Carlhian. It is modeled after the Court of the Lions at Alhambra, a 13th-century Moorish palace and fortress in Granada, Spain. (Moor is a general term for North African Muslims of mixed Arab and Berber descent who conquered Spain in the 8th century.)

As with most Islamic gardens, the Fountain Garden is geometrically symmetrical and includes a central fountain and water channels. The garden suggests a walled paradise, an important concept in early Persian and Islamic garden design. The water channels on top of the low walls around the central fountain were designed to represent the four rivers of paradise described in the Koran; the bubbling center jet symbolizes paradise/eternity itself. At the garden’s north end, a chadar (‘veil’) of cascading water streams down a tile wall. 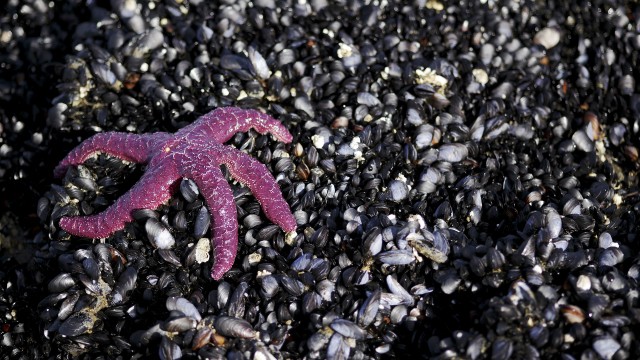 Key to the Forest

Figs are delicious, but did you know they also play a vital role in their habitats? 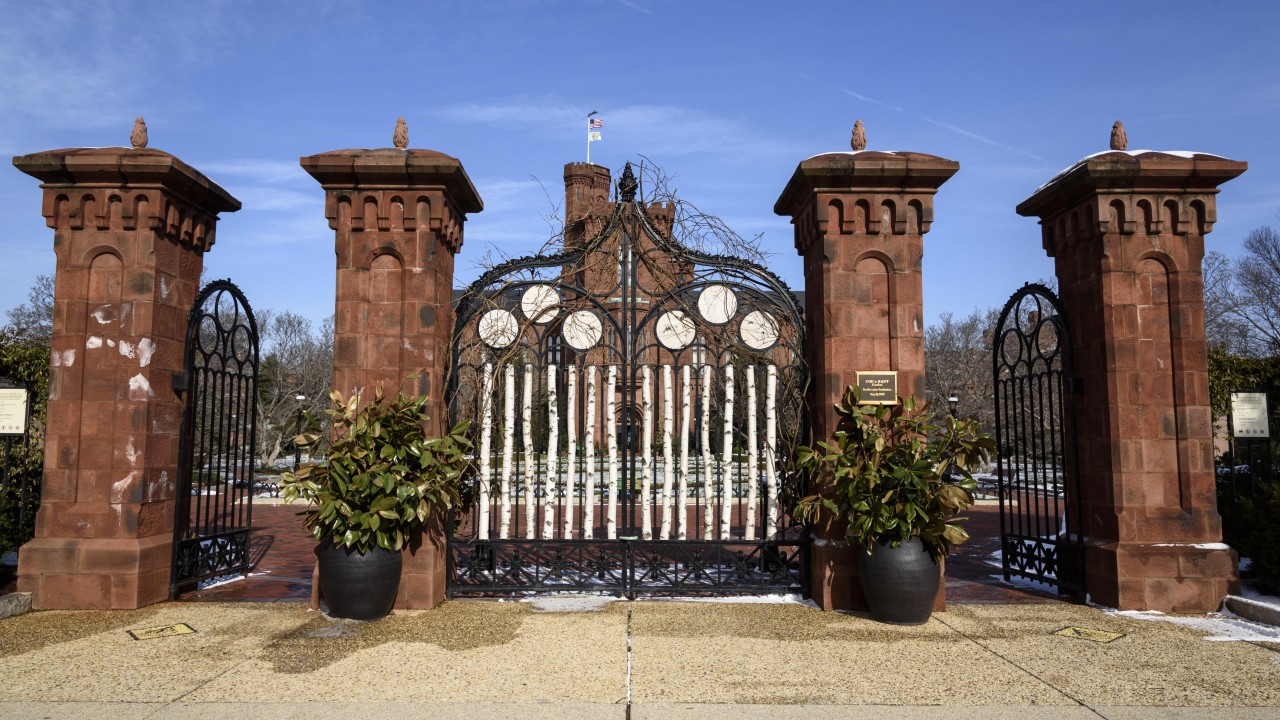 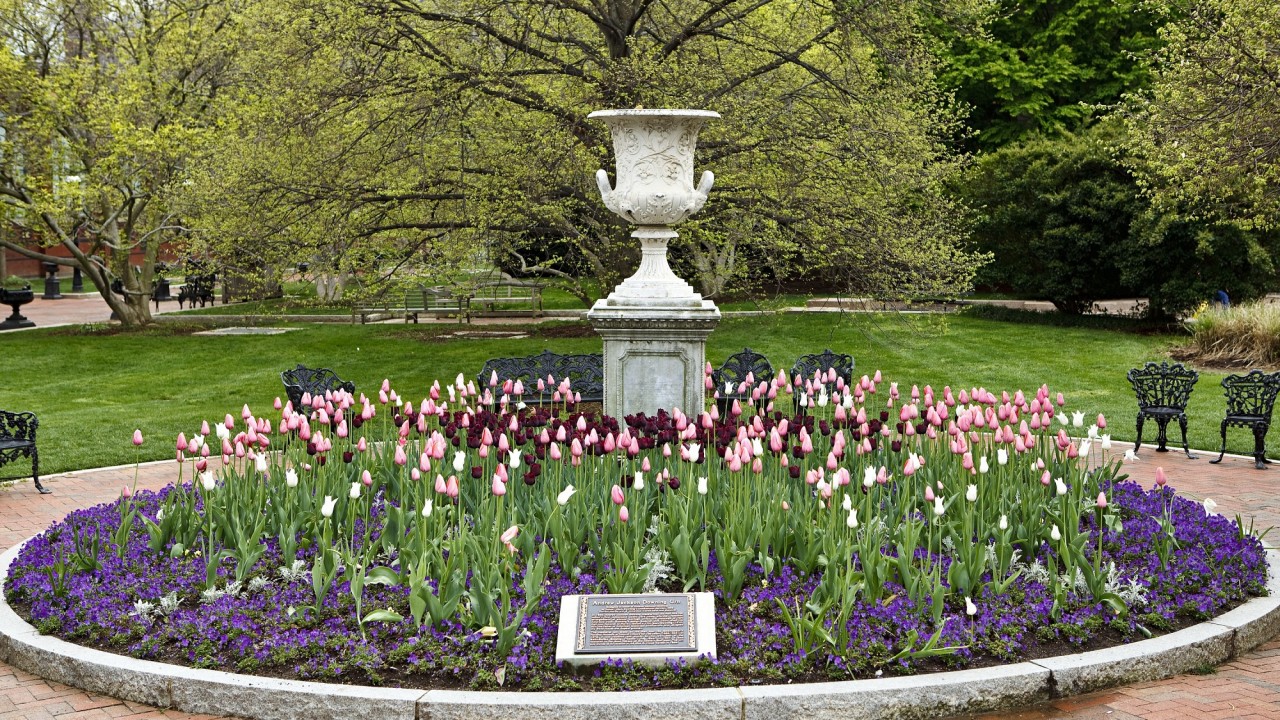 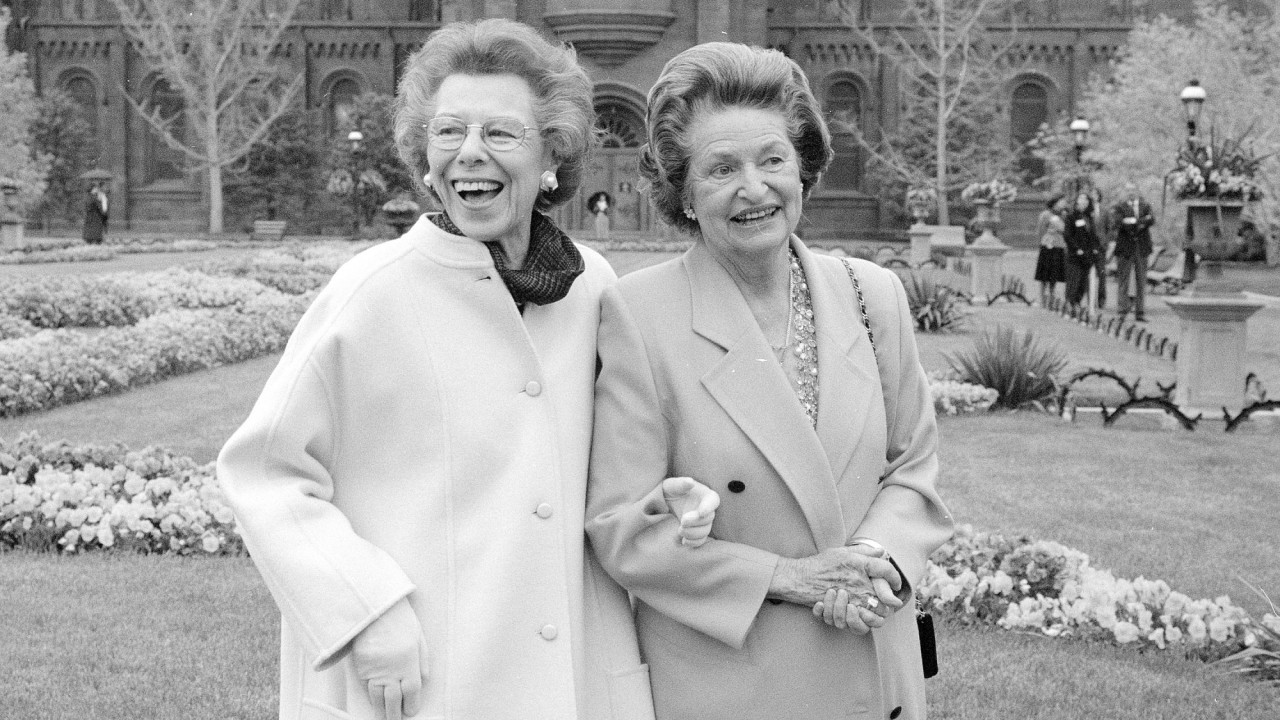 About Enid A. Haupt 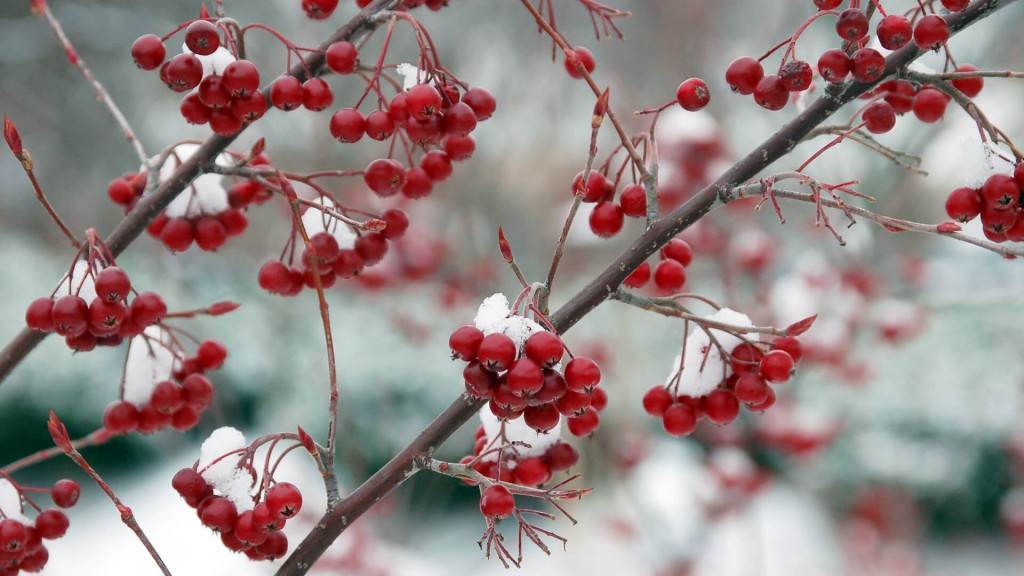