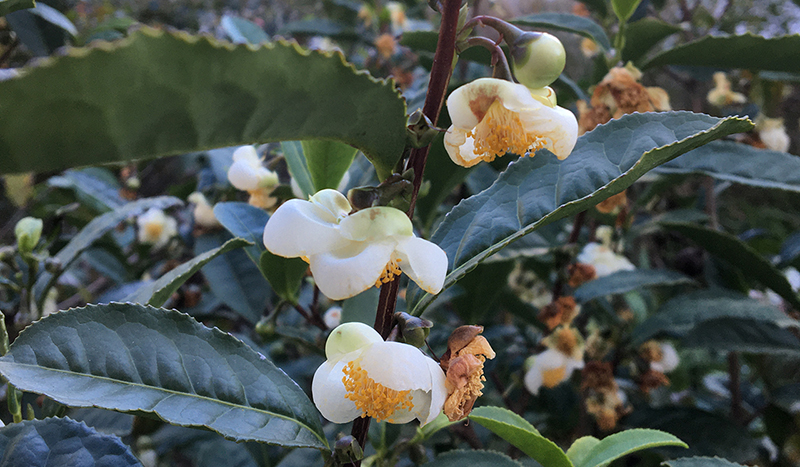 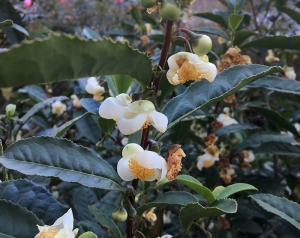 Americans have always been known for both revolutionary thought and lasting traditions.  An early American tradition during colonial times centered around drinking tea. At that time, tea was such a commodity that bricks of it were treated as cash and people literally waited for tea-laden ships to arrive in seaports.

Most of us have heard the story of the Boston Tea Party in December 1773. In an outraged response to heavy British taxes on imported tea, several cases were unceremoniously dumped overboard into Boston Harbor under cover of night.

What was it about tea that made it such a hot commodity?

Tea leaves come from a camellia shrub which originated in Asia.  You may be familiar with fall-blooming Camellia sasanqua or spring-blooming Camellia japonica in shades of red, pink and white.  Camellia sinensis, the type harvested for tea, has similar broadleaf evergreen leaves and smaller, open and simple white flowers with prominent yellow pollen and reproductive parts at the center, perfect for bees collecting nectar and pollen.

Tea, whether white, green or black, all comes from Camellia sinensis, once categorized as Thea sinensis by taxonomist Carl Linnaeus and later reclassified as a Camellia.  Because true tea only grows in warm climates, it was imported through the British East India Company from China. This virtual monopoly resulted in high taxes for the colonial consumer.

Outraged and possessing a new patriotic zeal, Boston women looked for different leaves to fill their teapots. Teatime was, after all, tradition. It provided a social opportunity for conversation, collaboration and perhaps even conspiracy.

But what tea alternatives were available to the colonists?  If they couldn’t replicate the caffeine content, perhaps they could at least come close to the tasting experience.

Goldenrod comes in many forms, most of them sprays of tiny yellow composite flowers.  One, Solidago odora, was known as a tea alternative.  It releases an anise scent when crushed.

Monarda didyma has a spicy, citrusy, peppery, minty fragrance reminiscent of true bergamot.  Bergamot orange is a citrus tree from Italy.  Bergamot orange oil, used in many perfumes, is also mixed with black tea to make Earl Grey tea.  Our own bee balm or bergamot is a native plant the Native Americans and colonists used for tea.

This plant, which grows along slopes and riverbanks, was commonly cited as a colonial tea substitute. Tea expert Bruce Richardson quotes a 1768 Boston Gazette article:

“Tea made from a plant or shrub (Ceanothus americanus) grown in Pearsontown about 20 miles from Portland, Maine, was served to a circle of ladies and gentlemen in Newbury Port, who pronounced it nearly, if not quite, its equal in flavor to genuine Bohea. So important a discovery claims attention, especially at this crisis. If we have the plant, nothing is wanted but the process of curing it into tea of our own manufacture.”

Colonists, according to Richardson, also used raspberry and strawberry leaves to make tea. A sweet or tart fruity tea could be made using the dried fruits and berries of plants from the rose family like apples, strawberries and rose hips.

Modern herbal teas from around the world

Today, we have access to even more plants used to make tea.

This comes from a South African shrub and contains no caffeine.

This tropical hibiscus from Africa and southeast Asia produces delicate pink and white flowers that fall off, revealing a bright red calyx rich in vitamin C.  This is the “flor de Jamaica” hibiscus used for hibiscus tea. People in the Caribbean make a drink from it called sorrel while people in Nigeria make a drink called Zobo. This plant is currently grown in the Victory Garden at the National Museum of American History.  It also has medicinal properties, so pregnant women should consult with their doctor.

Where can you see true tea camellia shrubs in the States?  There is one commercial plantation in South Carolina. However, most tea is still grown and processed overseas and imported for American consumers.

True tea plants are growing on the east terrace of the National Museum of American History behind our lavender and roses.  This garden area, part of Smithsonian Gardens’ Common Ground: Our American Garden exhibit, tells the story of plants grown and/or used in America.

You can find hardy ornamental camellias in the wooded area by the Victory Garden or along the Haupt Garden’s East Terrace.