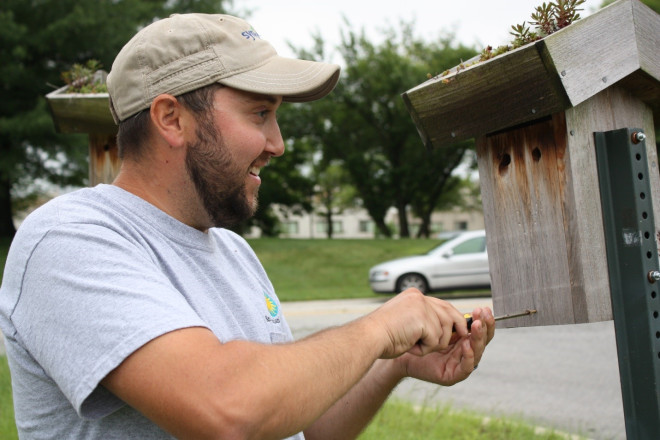 Bluebirds and Company: What’s Chirping at the Smithsonian Gardens’ Greenhouses

The summer season brings new life to the Smithsonian Gardens’ greenhouses. As you might expect, much of this new life is the result of staff work to produce plants for our gardens. However, there are also a surprising number of winged, chirping occupants on the greenhouse property this season. As a part of the Bluebird NestWatch effort organized by the Cornell Lab of Ornithology, Smithsonian Gardens has set up ten specially-designed bluebird houses around the greenhouse property. The greenhouse staff visits each birdhouse weekly and unscrews a side wall to make notes of the visitors and nest progress. Often times they find other species of birds occupying the houses, so it’s really a fantastic glimpse at a variety of bird life. During the past several weeks of collecting data, we’ve seen Bluebirds, Wrens, Tree Swallows, and Robins making their nests in these houses.

We also regularly see ground-nesting Killdeer around the greenhouse. Preferring ground mobility to flight, these birds are fast runners from an early age. This makes them difficult to approach especially as they are easily spooked. Though not one of our birdhouse residents, the Killdeer nest quickly became a weekly checkpoint for our observation tours and we were able to see four chicks this year.

It’s easy to imagine that the parents of these chicks were not particularly pleased with our weekly interruptions. As a result, we rapidly learned each bird’s defense strategy. Bluebirds are often shy creatures and the parents would fly to a vantage point to watch us with a keen eye while we conducted our research. Tree Swallows, on the other hand, are a little more aggressive and would dive-bomb us to get us to leave their nest alone. Adult Robins and Wrens would often just flee the coop entirely and wait for a quiet time to revisit their brood.

Killdeer, on the other hand, have developed a pretty impressive show to protect their young which uses camouflage, predator calls, and distraction performances. Killdeer often hang out near our gravel walks or driveways where, as seen in the picture below, their neutral colored feathers help them blend into the background. Under the cover of camouflage, the adults would use alarm calls to attract attention to themselves and away from their babies when we approached the nest. When that failed, the adults would lay down and stretch out their wings like they had been injured to make themselves appear an appealing victim to the perceived predator. Once the threat (in this case the greenhouse staff) was fooled by the adult Killdeer’s show and moved to approach, the adult would wait for the the chicks to be safely out of reach before miraculously “recovering” and flying away to safety. There’s nothing more humbling than being duped by the oldest trick in the book.

All in all, it’s been a terrific and refreshing few weeks for the greenhouse staff to get outside and witness the beauty of avian life. During this project we’ve not only seen countless chicks and eggs, we’ve also seen the these young birds develop from day-old hatchings into fledglings ready to fly. Despite being attacked by adults aggressively protecting their young and mocked by flawless Killdeer performances, it’s been a pleasure seeing the diversity of bird life out at the Smithsonian Gardens greenhouses.