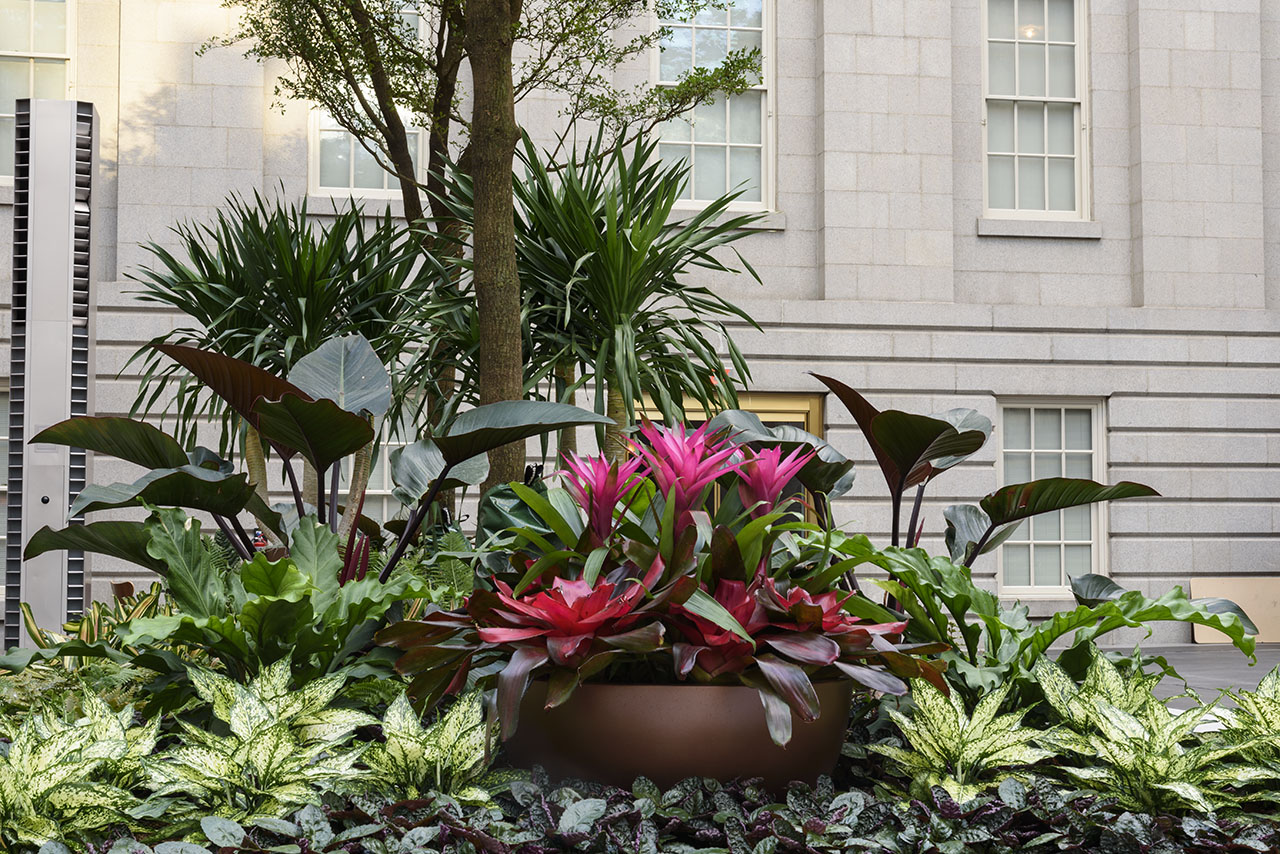 Bromeliads: Wonders of the Tropics and Our Indoor Spaces

Bromeliads are one of the wonders of the tropics. They are found in many different habitats and have a unique ability to create valuable microenvironments for tropical fauna. A coveted houseplant, bromeliads are also a prized ornamental for indoor and outdoor spaces thanks to their ease of care and varied colorful shapes and sizes.

The Bromeliaceae family includes over 70 genera and 3,000 species. The majority are native to the tropical Americas, with one genus found in the subtropics (Tillandsia–air plants) and one species endemic to Africa (Pitcairnia feliciana).The two most notable members of the family are the Pineapple (Ananas comosus) and the southeastern U.S. native, Spanish moss (Tillandsia usneoides).

Bromeliads are herbaceous perennials found in a variety of tropical environments from lowland and montane rainforests to deserts. They can grow both epiphytically (on trees or fallen branches) or terrestrially (in soil or on rocks). Even though they are well known as ornamentals, they have a unique characteristic that might not be common knowledge to some. Most species are monocarpic, meaning a particular plant blooms only once in its lifetime. The plant dies after it flowers and grows offshoots, or pups, to vegetatively reproduce.

Most bromeliads have sword-like waxy leaves which spiral around a central stem forming a rosette. This leaf arrangement creates a funnel-shaped reservoir or “tank” which holds water, along with organic debris and nutrients. This feature is thought to be an adaptation to the epiphytic growth habit. Given the lack of growing media around the roots, the plant needs to take up water and nutrients in a different way. Terrestrial species of bromeliads tend to live in xerophytic (dry) environments, so the presence of this tank provides a mechanism in which to store water and survive tough conditions.

This fascinating anatomical trait and ecological adaptation makes bromeliads key players in tropical ecosystems. They provide aquatic microenvironments that can support many species of invertebrates and vertebrates and help increase biodiversity. The water and debris held in a bromeliad’s tank encourages the growth of algae, fungi, and microorganisms which feed insect larvae and other invertebrates likes nails, spiders, worms, and tiny crabs. These invertebrates also use the tank as a refuge and place to reproduce. Some vertebrates like frogs, salamanders, and snakes also benefit from this microecosystem. The relationship is symbiotic since the plant absorbs nutrients derived from the animals’ droppings and decomposition.

From within these tanks, colorful inflorescences merge to lure the plant’s pollinators. The “blooms” that form are not actually flowers but modified leaves called bracts. Their bright color attracts pollinators to visit the very small, somewhat inconspicuous, flowers emerging from the bracts. As a pollinator enters the flower to consume its nectar, pollen is transferred to it and carried to the next flower, thus facilitating sexual reproduction. Hummingbirds, butterflies, and bats are among the most common pollinators, but bees are also known to visit bromeliads.

While bromeliads can be grown from seed, the most common and easiest propagation method is through the removal of the pups. This is a form of asexual reproduction, meaning the offspring will be a clone of the mother plant. Pups grow from the base of the mother plant once it completes its flowering cycle. When the pups are mature enough, they can be removed from the parent plant and potted up. The parent plant usually produces multiple pups which do not have to be removed all at the same time—it is best to wait until each one reaches a size mature enough to survive after its removal. Pups are ready to be removed once they have begun to form roots at the base of their stems, or once they are approximately a quarter of the size of the mother plant. Some attach above the soil line, some below.

To propagate pups, remove the mother plant from its pot and use a sharp sterile cutting tool such as a knife or small saw to make a cut at the base of the pup, close to the stem of the mother plant. If healthy enough, the mother plant can be returned to its pot; otherwise, it can be composted. Plant the pups in a moist potting mixture (all-purpose potting soil with a little orchid bark or perlite mixed in for additional drainage), making sure that the base of the pup is about 1” under the soil. Place in a bright location, out of direct sunlight. Water when dry. It will take two to three years for the new plant to flower and reproduce.

Bromeliads have become an important part of Smithsonian Gardens’ interior and exterior displays. As the number and types of varieties available from nurseries continue to expand, we have the opportunity to choose from a large selection of colors, shapes, and sizes. Their leaf variegation and blossom colors allow us to use them as a stand-alone specimen or enmasse.

The plant’s staying power makes it a great choice for challenging environments. In particular, bromeliads are an ideal way to add color in dark spaces where other flowering plants may not survive for an extended period of time. Here are some of the ways we use bromeliads in our horticultural displays: