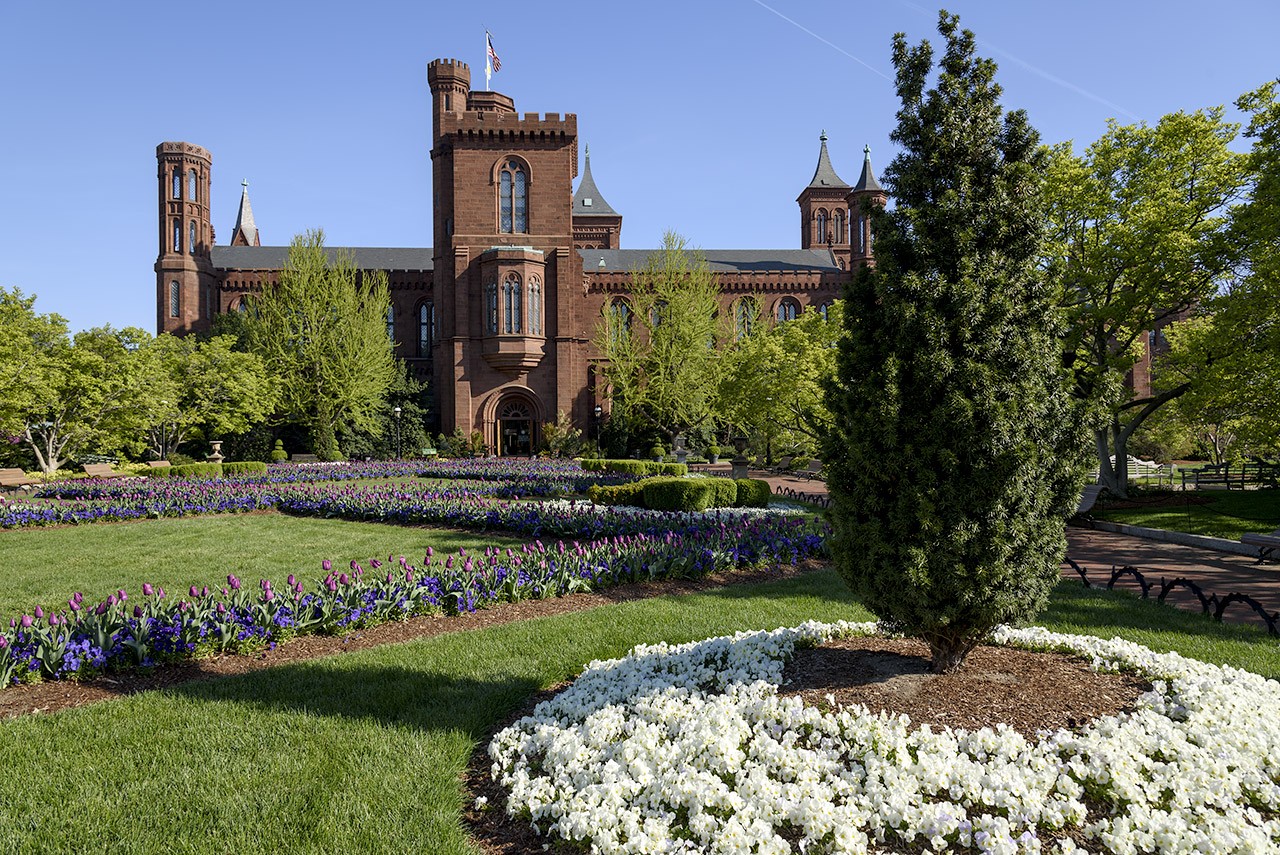 Looking back at 50 years of Smithsonian Gardens

The charge to evolve the Smithsonian grounds into engaging, informative, and inspiring gardens and landscapes began on July 31, 1972, when S. Dillon Ripley (1913-2001), the eighth Secretary of the Smithsonian, hired James R. Buckler as a horticulturalist for the Landscaping and Grounds Section within the Building Services Division of the Buildings Management Department. By the mid-20th century, the grounds around the Smithsonian museums along the National Mall in Washington, D.C. were simply large open lawns cluttered with space-age rockets and temporary outbuildings. Months later, in 1973, Buckler was chosen to serve as Director of the newly established Horticultural Services Division within the Office of Plant Services. Over the next 5 years, the grounds of the Smithsonian were groomed into handsome areas that reflected the learning and engagement occurring inside its many museums and galleries. Horticulture staff undertook the care of a Living Plant Collection that began with five orchids, and a few thousand perennials and woody plants. Today, the number of orchids has grown into the thousands and the perennials and woody plants into the tens of thousands.

In 1976, the Horticultural Services Division was renamed the Office of Horticulture. In preparation for the United States Bicentennial that same year, period objects and garden furnishings were collected for A Victorian Horticultural Extravaganza exhibition at the Arts and Industries Building and a Victorian Garden was established in the South Yard of the Smithsonian Castle. The garden’s design was influenced by the Horticultural Hall displays at the Centennial International Exhibition of 1876 in Philadelphia, Pennsylvania. When the Arts and Industries exhibition closed a decade later, the featured objects formed the basis of the Office of Horticulture’s artifact collection.

Over the next decade, the Smithsonian would expand its facilities underground behind the Smithsonian Castle, temporarily removing the Victorian Garden during construction. This garden was restored in 1987 and dedicated as the Enid A. Haupt Garden, named after the philanthropist and garden lover who endowed this space. In the years that followed, the Office of Horticulture was renamed Horticulture Services Division (circa 1992) and additional gardens and landscapes were established including the Anacostia Community Museum Landscape, Freer Gallery of Art’s Courtyard Garden, Hirshhorn Museum and Sculpture Garden, Kathrine Dulin Folger Rose Garden, Mary Livingston Ripley Garden, National Air and Space Museum Landscape, National Museum of African American History and Culture Landscape, Native Landscape at the National Museum of the American Indian, Robert and Arlene Kogod Courtyard at the Smithsonian American Art Museum, both the Pollinator Garden and Urban Bird Habitat at the National Museum of Natural History, and the Victory Garden at the National Museum of American History.

Fifty years of growth has seen a maintenance and grounds keeping organization in 1972 evolve into an American Alliance of Museums (AAM) accredited museum that now includes 180 acres of managed public gardens and landscapes across 15 sites, in addition to archival, artifact, and living collections, and educational programming. To gain better recognition across the Smithsonian and externally, Horticulture Services Division was renamed Smithsonian Gardens in 2010. Today, the “museum without walls” continues to be an institution that engages, informs, and inspires.