The Botany of Magnolias

At the beginning of each year, as the cold of winter ends and the days start to slowly get warmer, we celebrate the coming of spring with one of the first flowering trees to bloom. Magnolias begin to open in March and continue blooming throughout the year, expressing itself uniquely in their many species that come from all over the world. Today, we dive into the botany of the magnolia to supplement the beauty of these magnificent trees. 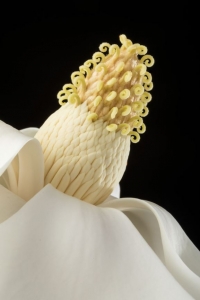 Magnolias evolved on Earth as far back as 95 million years ago during the Cretaceous period. While there were dinosaurs at that time, bees still did not exist, so magnolias evolved to be pollinated by ancient insects—you may know them today as beetles. Due to this relationship magnolia flowers have tough carpels—the female parts of the flower—to avoid damage from beetle mandibles as they feed looking for pollen. The carpels also mimic the stamens—the male parts of the flower—to help trick the beetle into spending more time on the flower and ensuring pollination.

To minimize the risk of self-pollination, which can result in inbreeding depression and recessive mutations, the flowers open in the morning and the stigmas are receptive to pollen that is brought to them by foraging beetles throughout the day. When evening comes, the innermost tepals close around the carpel and trap the pollinating beetle. While the tepals are closed, the beetle deposits pollen all over the receptive stigmas. The stigmas then close and the anthers become active, covering the same beetle in fresh pollen so that when the sepals open in the morning, it will fly out and find another flower to pollinate. This precise delay in flower function helps to ensure cross pollination. 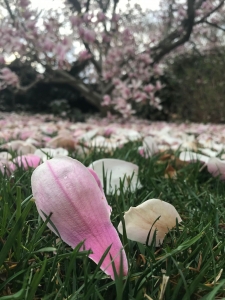 Most flowers have a distinction between their petals, which tend to be the colorful floral parts we admire, and the sepals, which tend to be a green, leaf-like structure under the petals which encloses the flower. In magnolias, the petals and sepals are similar in size, shape, and color, so we collectively call them all tepals.

Magnolias are also recognized by their fruit which is a cone-shaped aggregate of follicles. These cones vary in size depending on the species but will appear somewhat red and fuzzy with reddish-orange seeds that ripen and burst out of the follicetum (fruit) by early fall. The fruit of Magnolia grandifolia is shown here and is about 3-5″ long.

Most magnolia bark tends to be silvery and smooth. This feature is most notable in the winter, especially when the bare twigs are topped off with the fuzzy bud scales patiently waiting to open in the coming warmth of spring, such as the bud of Magnolia stellata. 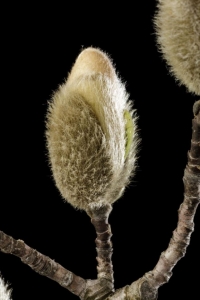 Botany is the scientific way we classify and understand evolutionary relationships among plants. Pierre Magnol was one botanist working in the 17th century classifying plants in pre-Linnean polynomial Latin. While not the taxonomic system we use today, Magnol’s intuitive understanding of grouping plants together in a family was groundbreaking by relating similar characteristics among closely related species. Species that fall into a family grouping tend to have notable features which distinguish them from other plant families, such as the characters mentioned above. To honor his botanical work, another botanist, Charles Plumier, named the genus Magnolia and family Magnoliaceae after Pierre Magnol in 1703.