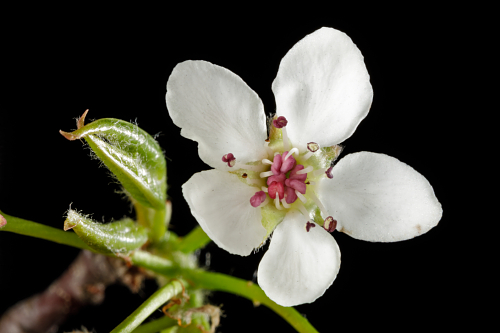 Everyone has heard the horror stories of a plant or animal species introduced to a new area with good intentions, only to find out years later it wasn’t such a good idea. The Callery pear (Pyrus calleryana ‘Bradford’), commonly referred to as the Bradford pear, is one of those plants.

First introduced in the mid-1960’s as the ideal street tree, the Bradford pear features a fast growth rate with an upright branch habit, prolific white blooms in spring, and the ability to grow in most soil conditions. Landscapers quickly realized what were initial selling points for this tree were actually morphing into negative attributes. The quick growth rate and tight, upright branch structure make the limbs and branches prone to breaking. Originally thought to be a sterile tree, the Bradford pear tree has hybridized with other pear trees and now produces a small inedible fruit.

The real problem occurs when birds eat these fruits and distribute the seeds in natural areas. This is creating an environmental nightmare right before our eyes. I would like to think these lovely, cloud-like white blooms are a sign of spring, but they are actually destroying native landscapes and taking over open meadows and fields. I know from firsthand experience. This picture was taken on my own property. I moved here eighteen years ago and have never planted a Bradford pear. In fact, at that time we were on a mission to eliminate the Tree of Heaven (Ailanthus altissima), another invasive tree species, from our natural landscapes. Now it looks like my meadow is being overtaken by pear trees and I’m not even sure where the closest pear trees were intentionally planted.

While this is not the first plant introduction discovered to have negative environmental impacts, it will not be the last. It is a prime example of our responsibility to be environmental stewards for the natural world in which we live. Without our help and intervention, we could quickly lose native species and natural landscapes.