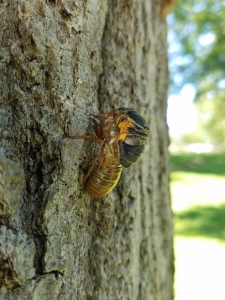 Many of you have probably already seen articles or news reports popping up about Brood X, the tenth designated group of 17-year cicadas found within the United States. Some of you may remember the last time this specific cicada brood emerged, back in 2004, or have experienced other periodical cicada broods in other parts of the country. All the eggs and nymphs from Brood X that hatched 17 years ago are about to have the biggest coming-of-age event of the year and we all have a front seat to view this amazing natural phenomenon.

Where have they been?

Cicadas, a type of true bug in the order Hemiptera, are related to insects such as leaf hoppers and tree hoppers. They spend most of their life safe and sound 2-8 feet below our feet feeding on tree roots until they are ready to dig their way back to the surface. In a sense they have been around us all along, just not where we can see them.

Once they come out of the ground, the nymphs will crawl up any nearby tree, plant, or structure where they latch on so that the adult can eclose (aka emerge) from their former husk. The newly released adults that have fully emerged from their old skin (known as exuviae) now have one goal in mind – to mate and produce offspring.

It’s important to note that not all cicadas take 13 or 17 years to become adults. Another type of cicada, the annual or dog-day cicada, can be seen every year. These cicadas typically appear later in the summer here in the northern hemisphere – usually in July or August. Due to overlapping generations we tend to see them in smaller populations.

The periodical cicada is usually black and orange with red eyes. The more common dog-day cicada has more of a green coloration and dark-colored eyes.

This is the point when most people will first begin to really notice these incredible and HARMLESS insects.

Cicadas are considered poor flyers, especially compared with other insect families such as dragonflies and bees. This can be concerning for bystanders as cicadas will often bounce off an unsuspecting passerby or even land briefly for a rest while they reorient themselves. It also does not help that the minute claws they use to grasp onto bark and other surfaces help them cling to clothes and other fabrics, sometimes making them difficult to remove. 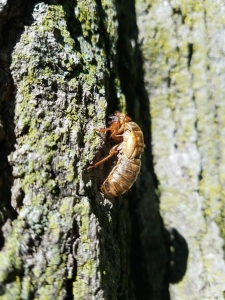 But try to be kind to cicadas. Their claws can be accidentally ripped off if you pull on them too hard. Try to calmly unhinge their feet from any fabric and place them on a nearby tree or surface. Keep in mind that they don’t sting! Understandably, not all people will be comfortable doing this and may welcome some help removing a hitchhiking cicada. Just remember to continue to follow good COVID-19 practices by wearing a mask and limiting close proximity to others.

What’s all that noise?

Even if cicadas are not visible, most people will become aware of their presence just by the sound they make. Male cicadas are expert noisemakers thanks to a special ridged organ called a tymbal that they vibrate by flexing muscles attached to it to make their distinct call. Females will use a series of wing flicks to call back to their male counterparts.

How much noise can a little insect make? When you account for the sheer number of cicadas that will be out this spring, you can anticipate noise levels of 80-100 decibels in areas with high periodical cicada populations. This is about the same level as sitting in heavy traffic or the sound of a handheld drill.

What do they do?

Cicadas are harmless to humans and animals. However, it is important to point out that they can have an adverse impact on trees and woody vines. A good rule of thumb is not to plant new trees or woody vine plants, such as grapes, a year before a major periodical cicada brood is slated to emerge as they can damage branches.

Cicadas do not harm trees through their feeding. Rather, damage can be brought about by female cicadas who lay their eggs along the tips of branches that measure around ¼- ½ inch in diameter. This has little impact on the overall health of most mature trees since they will usually flush out new growth. For young trees and vulnerable vines, however, it is a good idea to cover them in mesh netting to deter females from laying eggs on them.

It is not recommended to use pesticides to try to control adult cicadas. Pesticides have not been found to be effective at curbing cicada populations, particularly at the level we will be seeing them this year. Not to mention that the type of pesticides that could be applied would potentially risk harm to non-target organisms and the environment.

What are they good for?

You may be surprised to learn that periodical cicadas serve important functions for the environment. They are an important food source for many birds, amphibians, fish, and mammals (including squirrels, skunks, and even foxes). Periodical cicadas are not toxic, so don’t worry if your pets decide to gobble them up. And if you are feeling adventurous, there are even some great cicada recipes out there for people.

When cicadas emerge, they create tunnels that help aerate the soil around trees and plants. These holes allow for air and water to get back into the soil, which improves the soil and root health of the plants.

In their final act, as the bodies of dead cicadas begin to decompose, they add a boost of nutrients to the soil, which stimulates seed and nitrogen production in plants. In this way cicadas fuel tree growth for several years after they are gone.

Love them or hate them, I hope that by learning more about these fascinating insects that we can respect their role in the environment. Thankfully, we only need to tolerate them for a few weeks every 17 years. 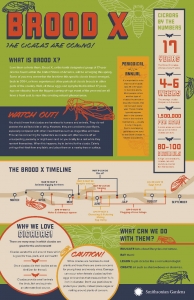 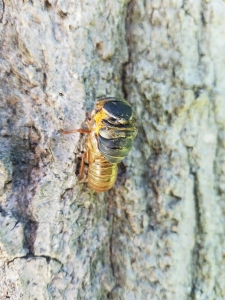