The grounds surrounding the National Museum of the American Indian are considered an extension of the building and a vital part of the museum as a whole. By recalling the natural landscape environment that existed prior to European contact, the museum’s landscape design embodies a theme that runs central to the museum, that of returning to a Native place.

More than 33,000 plants of approximately 150 species can be found throughout the landscape. Not only are they native to the Piedmont, they are also ethnobotanical, and can be used for food, fiber, dye, medicine, ceremonies, building materials. The grounds encompass four habitats: upland hardwood forest, wetland, cropland, and meadow. Native wildflowers grow under oaks, pines, and magnolias, while paw-paws and birch trees surround the water-lilies and cattails of the wetlands. Native American crop rotation and traditional methods such as the Three Sisters Garden of corn, beans and squash are combined with organic practices using natural predators like ladybugs to maintain a sustainable garden on the south side of the museum. Grasses, coneflowers and goldenrod fill the meadow.

The planted landscape is grounded by four stone cardinal direction markers which lie along the east-west and north-south axes of the building. The large boulders come from four corners of the western hemisphere: Hawaii (west), Canada (north), Maryland (east) and Chile (south). Forty additional boulders from Canada, called Grandfather Rocks, are scattered throughout the landscape. The clay sculptures entitled Always Becoming, designed by Nora Naranjo-Morse (Santa Clara Pueblo), stand on the south side of the museum.

An offering area and many places of rest and reflection are built into the architecture of the landscape. Visitors can enjoy performances at the fire pit and outdoor amphitheater or at the Welcome Plaza. Waterways, central to the landscape, are found in the eastern wetlands and in an acclaimed water feature representing Tiber Creek, a former tributary of the Potomac River in Washington, D.C. All of these elements combine in the landscape and invite visitors to return to a Native place. 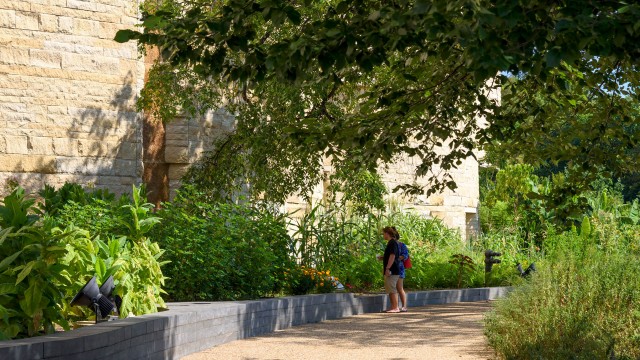 The Native Landscape at the NMAI features more than 33,000 plants of approximately 150 species native to our area.