Land plants have been around for hundreds of millions of years – and they’ve been busy.

Plants have evolved some simply amazing adaptions: They move water to great heights.  They transform rock into soil.  They grow big – sometime huge.  They attract animals to help them move and reproduce.  And they put the “food” in food webs, using the sun’s energy to make sugar from water and carbon dioxide.

Come explore some of the highlights of plants’ fascinating story.

Earth’s earliest life evolved in water—so land was a challenging place. Plants were pioneers: they moved to land more than 100 million years before early backboned animals hauled themselves out of the muddy shallows to the shore. The earliest land-dwelling plants, like their descendants, retained water with a waxy outer coating. But they grew only in low, sprawling green mats on moist surfaces—they couldn’t get tall without a way to move water up.

Land plants didn’t stay small. Some species evolved a system of connected tubular cells called xylem. Water could now move straight up through these tubes: from the roots through the stem to the leaves. Later, some plants evolved woody tissues that could support thick trunks and heavy branches. These were some of the world’s earliest trees.

From Rock to Soil

Plants make carbohydrates via photosynthesis using carbon dioxide, water, and the sun’s energy. This doesn’t just feed the plants—it feeds almost all animals as well. But it’s important to remember that nature is about survival: plants photosynthesize for their own needs, not to feed other organisms.

The graceful ginkgo tree, with its distinctive fan-shaped leaves, lines urban streets all over the world. Ginkgo biloba is the sole survivor of an ancient seed-plant lineage that first appeared 200 million years ago.

By about 1,000 years ago, all Ginkgo species had gone extinct except for small populations in China. Monks began to cultivate the tree for medicinal use. Today, the ginkgo we know is both the last species of its kind—and perhaps humans’ first conservation success.

Extinction has always been a part of life. Today, humans are increasing the rate of extinctions, as our activities warm the climate and change ecosystems. But we can also ensure plant diversity is preserved. Seed banks preserve seeds in case of environmental disaster. Gene banks preserve plant DNA for scientific study.

In a dense, wet forest 130 million years ago, ferns were fertile and seed plants were prolific. But Earth’s earliest flowers were so tiny and unspectacular, they would have been easy to overlook. So how did flowering plants get ahead? They grew fast, made seeds, and lured animals to help them fertilize and spread those seeds. These adaptations allowed them to fill open areas cleared by flood, fire, and dinosaurs.

Flowering plants eventually stole the show— but it took tens of millions of years of evolution. Today, about 90% of all plants (about 300,000 species!) produce flowers. They thrive in a breathtaking variety of ways: as tiny free-floating pondweeds, undersea grasses, giant rainforest trees, small parasites that steal nutrients from other plants, prickly cacti, and lovely spring wildflowers.

As flowering plants spread, they affected animals everywhere. Some evolved sweet nectars and tasty fruits that enticed animals to pollinate their flowers and spread their seeds, while others evolved prickly spikes and deadly poisons that kept animals far away. Animals evolved, too—with long, thin mouthparts to reach sugary plant fluids, or enzymes to break down plant poisons, for example. This epic, escalating friend-and-foe relationship continues to today. 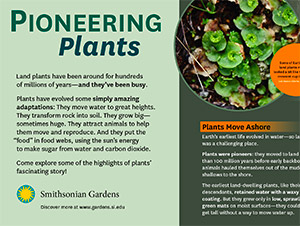