Way Down Yonder in the Paw-Paw Patch 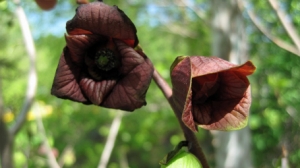 Ever heard of the pawpaw tree? Ever tasted its fruit?  Did you even know it had fruit?  Though it does not have the name recognition of an apple or peach tree, the pawpaw tree has a long and important history in the United States, one associated with everything from nutrition to folklore. 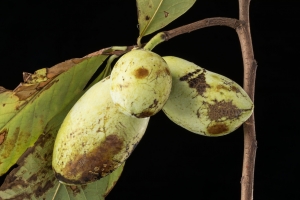 Pawpaws have the largest fruit of any native tree, which scientists think developed to attract now-extinct megafauna like giant sloths, wooly mammoths, and other massive herbivores. Native people in the Mississippi Valley and elsewhere planted and cultivated pawpaws in ways that are still visible in the landscape today. In the mid-sixteenth century, Spanish explorer Hernando de Soto likely observed Mississippi Valley Native Americans growing and eating pawpaws; news of this exotic fruit subsequently spread to Europe. Confusion over the fruit’s name started immediately. One theory is that the Spanish mistakenly named the fruit “papaya” because of its green skin and orange flesh similar to a papaya. Some think it is a muddled English spelling of a different Caribbean fruit. What is known is that the tree’s scientific name (Asimina triloba) comes from the Powhatan word Assimina, which a Jamestown settler transcribed in 1612 as “wheat plum.”

According to James A. Little in his 1905 pamphlet, A Treatise on the Pawpaw, pawpaw fruit helped sustain Native Americans and early American settlers in times of harvest failure. Little wrote that pawpaw trees required minimal maintenance in order to survive in the wild, unlike apple, pear, or peach trees. While this observation ignores various tribes’ farming practices which spread and maintained the trees—and likely selected for sweeter or more palatable cultivars—the native pawpaw did thrive much more easily than non-native fruit trees. Thanks to its resilience, Native Americans and early pioneers enjoyed pawpaw fruit as a dependable source of nourishment. Pawpaws kept members of the Lewis and Clark Expedition from starving during their travels west in 1804-1806, were a favorite fruit of folk hero Daniel Boone, and fed escaping African American slaves during their dangerous journeys. 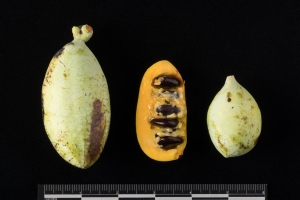 Pawpaws extend across eastern portions of the United States between Northern Michigan and Georgia. Unlike the tropical members of the Annonaceae family to which it belongs, pawpaw trees thrive in temperate conditions and tolerate some cold weather. Despite this resilience, pawpaws struggle to reproduce. Scientists believe the tree is ineffective at attracting flies and beetles to pollinate its flowers, thus creating challenges for reproduction.

The pawpaw tree produces a nutritious and delicious fruit in the summer which is actually a berry. The pawpaw berry is also called a “custard apple,” a name derived from the creamy texture of the fruit. It is said to taste like a mix between a banana and a pear, with a hint of vanilla. 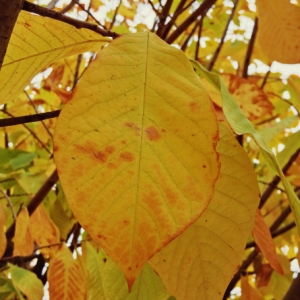 Next time you stop by one of the Smithsonian gardens, keep an eye out for this beautiful tree with a deliciously interesting past.